How to Guide Teams Through Conflictual Conversations with Marcus Crow

Conflict is a complicated topic. It can conjure up images of war, hurt, violence, upset, fractiousness.

But when it is facilitated well, conflict can be transformational.

So, how do we move away from the idea of conflict being dangerous and divisive and instead embrace it as a tool for unlocking growth and progress in the groups we live and work in?

That’s what Myriam and Marcus Crow, co-founder of 10,000 HOURS and specialist in high stakes facilitation, discussed on episode 66 of workshops work.

Whether you are a seasoned professional when it comes to conflict management or its something you dread, Marcus has such brilliant experience and insights into how we can manage conflict productively, everyone can benefit from listening to him.

Know your group and prepare for them

“I don’t think I appreciated the value of understanding the particular nuanced context of the group,” admitted Marcus. “The personalities in the group, the context of the business is in right now and the pressures that are around them.”

This “localised context”, as Myriam named it, is the foundation of effectively helping groups to traverse conflictual conversations.

It is no longer sufficient for Marcus to say, for example, “It’s a sales team in a bank. That tells me enough.”

Instead, Marcus now goes all the way down to identifying, “This is Allison’s team. Allison’s been here for three years. She’s got a very demanding set of goals to achieve. There’s a lot of pressure on her. She’s got a couple of high performers that don’t get along. She’s got an IT transformation that’s taking people out of her team…”

Marcus advocates putting in the time before the workshop to better understand the group and its dynamics.

“What I like to do in that situation is” to ask the client or the team leader to “tell me how you feel about what we’re trying to do next week, tell me about the personalities that are in the room, tell me who I might want to speak to.”

And, more importantly, Marcus thinks it’s important to take this learning into your own hands.

“In some instances, I’ll sometimes ask if I can join their team meeting that’s coming up. Can I dial into the call and talk to the team for 15 minutes? Are there any current corporate slide presentations that you want me to read to make sure I’ve got the lingo, or the shorthand, or the jargon of what they’re doing?”

“They’re all things that helped me feel ready,” Marcus exhaled, or as “ready as you can be knowing that you’re going to strike a match at the start and goodness knows what’s going to actually start to catch light from that process.”

Learn the language of your group

Myriam wanted to highlight something Marcus mentioned when talking about his methods of preparation.

“You mentioned the jargon, or the lingo, and that you try to familiarise yourself with it,” Myriam noted. “I can imagine that it helps you to align with the team once you’re in the workshop on a totally different level, because you speak the same language and you’d become one of them.

“Sometimes it’s the small words and the meaning to these words that will make all the difference.”

Marcus agreed wholeheartedly. “Jargon is a way to show membership. It’s a way to show that you belong to a tribe, because you are literate with the language that they use.”

“I think the highest praise that we as facilitators can get is when people in the group say: ‘when did you join our firm?’”

“I love it when that happens,” Marcus beamed, “they believe that you know about their history, their projects, the names of their projects, and that they’re six months behind and that Alison loves skiing!”

“That’s priceless because that’s when they know you did your homework, because they know you can’t just make that up.” To the group, hearing you speak their language and demonstrate your understanding of them says “you’re taking this pretty seriously, we appreciate that we’re significant enough for you to have taken the time to come to understand our particularities.”

Myriam agreed completely, noting that “it sets the first level of trust.” Making it easier for them to “join the process that you designed for them and trust you to guide them through any difficult conversations.”

Once you have established your trust and place amongst the group’s idiosyncrasies, you can start the deeper work on conflicts. After all, understanding “the differences, hierarchies, and issues due to big personalities”, as Myriam noted, is not the same as dealing with those differences when they conflict.

“Depathologising conflict”, Marcus explained, is about “being able to conflict and survive – and just talking about that in the abstract, rather than focusing on a particular conflict the group has. To talk about the idea that conflict is unpleasant, but that being in an unpleasant process isn’t a reason not to do it.”

I want to “acknowledge up front that we’re going to dislike this and do it anyway and recognise the fact that, as we go along, we’re going to hit some bumpy spots.”

You can point out the conflict – Marcus encourages it, in fact – and own the topic, but not immediately or directly.

To achieve this, Marcus recommends practicing an ‘easier’ argument. Ask the room for “a low stakes issue” that there has been conflict over in the past.”

“The group then wrestles in and they play around and we’re just practising arguing. Some groups need that more than others if they don’t know how to conflict safely.”

Bridging the gap between low stakes and high stakes conflict

Myriam was eager to know, “how do you then bridge the gap between this low risk conflict scenario to then push it to the higher risk? Does the group dynamic in dealing with the conflict follows a similar pattern?”

“The underlying assumption,” Marcus reflected, “takes from the skill acquisition literature in deliberate practice, which says each attempt you make is going to be better than the last.”

“And I will use that with the group and tell them not confuse ‘this is difficult’ with ‘we are bad at it’,” and really try to “separate the merit of the approach with your competence with the approach.”

Abandoning your attempts at healthy arguments and conflict is “like falling off a bike and then saying bikes are stupid and don’t work. So now you could avoid bikes for your whole life if you want to or you can say, let me have another go to see the benefits.”

“So the theory is not that there’s a pattern, because once you cross from Christmas party to the bonus scheme, sometimes the room just erupts straight away and sometimes that doesn’t happen.” 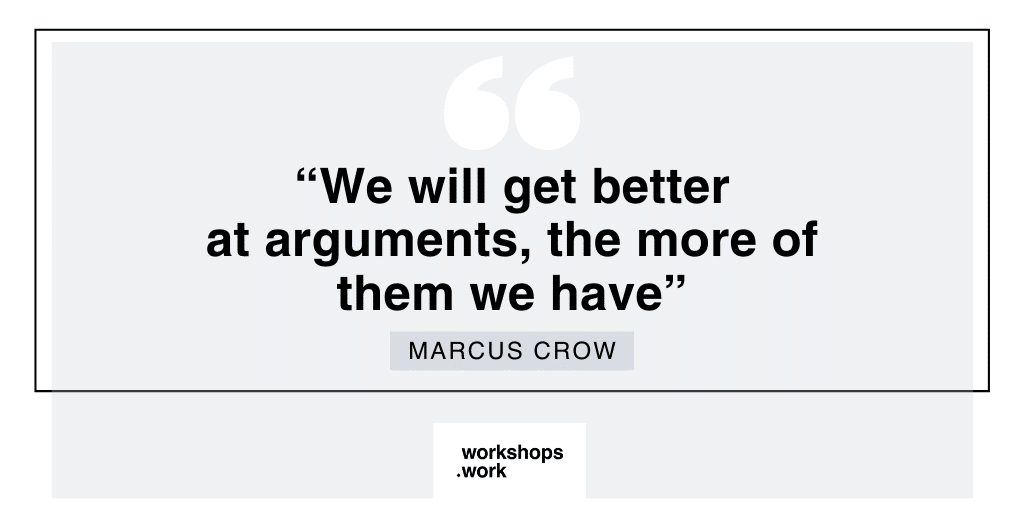 Marcus was keen to stress that learning how to practice safe conflict is a matter of repetition.

“We will get better at the arguments, the more of them we have through time.”

If you want to learn how to better manage conflict and arguments, moving towards a place of productivity and progress and away from struggle and strife, then your first port of call should be to learn more in episode 66 of workshops work.

Marcus and Myriam discussed so much more about conflict and arguments, including ways to balance safety and risk, why the dominant narrative in management is harmful to progress, and why Marcus believes a ‘Royal College of Facilitation’ would do wonders for the practice.

You can listen to the show on your favourite podcast player, searching for “workshops work” or stream the episodes on workshops.work.

***If you enjoyed reading my article, please share it with your network and sign up for my newsletter.