What Comes After the Prototype? – with Douglas Ferguson 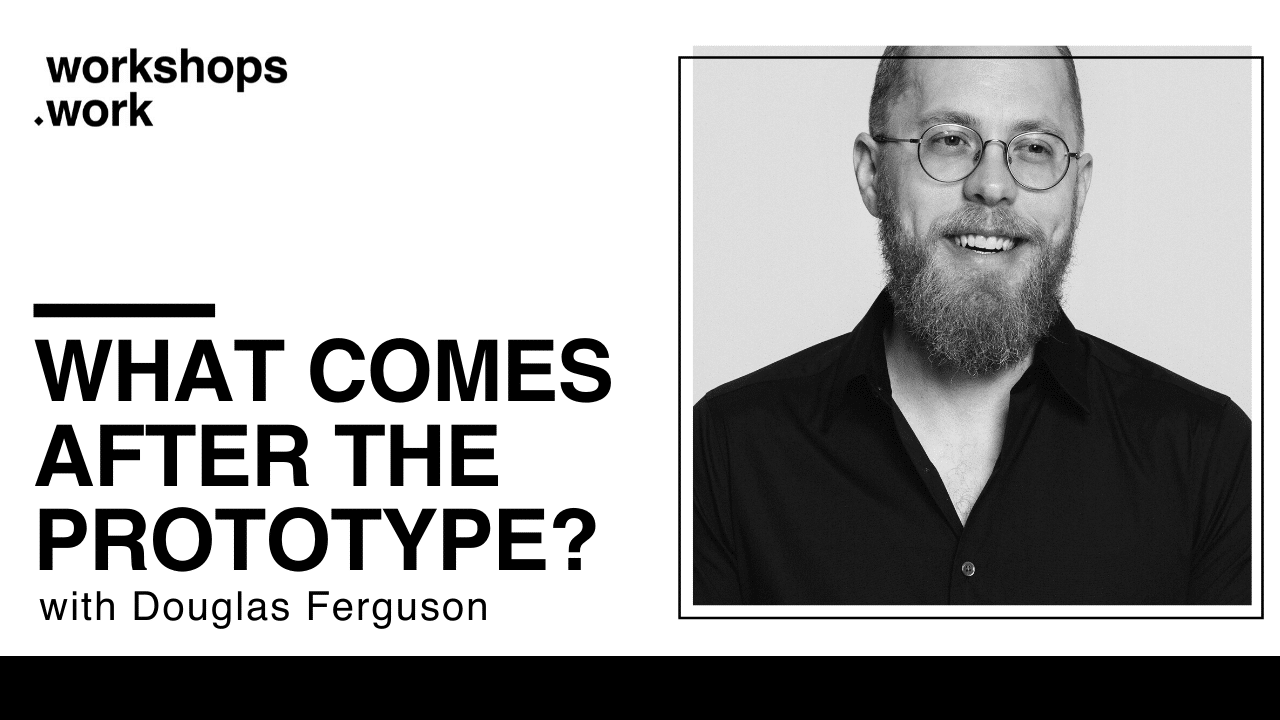 Douglas Ferguson is an innovation specialist who has been helping teams run more effective Design Sprints, with all the knowledge he has gained from over 20 years in Chief Technical Officer and Chief Product Officer roles.

But Douglas is not ‘just’ a technical wizard. He sits at a fascinating intersection between tech teams, product users, and outcomes. This is because his agency, Voltage Control, facilitate Design Sprints and workshops.

Myriam was fascinated to hear Douglas’ views on facilitation, as he works in an area very different to the ones she has experience in.

This really is the beauty of facilitation. The skills of communication, emotional understanding and connection, and creating space are relevant in every discipline, but they operate in very different ways and for different purposes.

So, what are the lessons we can learn from tech – specifically from models of prototyping – and how can we apply them to facilitation?

“Prototyping”, according to Douglas, “is a mindset”.

We don’t often think of prototyping outset of tech settings but, actually, “there are very few things you can’t prototype” because a “prototype is just there to answer a question.”

If we are trying to establish whether a new feature, the first proof of a product, or a change in an organisation meets a client’s standards, “simply asking the client is not a very good test”.

Prototyping allows us to “simulate the future in a way that will help us accurately answer our question.” It takes a hypothesis and makes it tangible.

Douglas was keen to stress that some people misunderstand prototypes and their purpose – “a skewed definition” that “prototypes are a proof of concept.”

Ideally, prototypes should be trying to answer a really clear question. If you are not clear on the question you are answering with a prototype, Douglas believes you will overbuild it.

The intersection of prototypes and facilitation

If a prototype is the interface between the team developing a product and its potential users, the workshop itself is an interface to help the team itself work together.

Facilitation, then, sits at an intersection of many sites.

Douglas and Myriam both noted how, in senior leadership planning meetings that drag out over weeks or months, “once we can realise it and simulate it in any kind of fashion, it just becomes so much more tangible”. Prototypes help clarify and push forward big concepts.

Prototyping the ideas we generate in our workshops can do the heavy lifting for the process of change, bringing our ideas into stark reality – for better or for worse.

Prototyping is, of course, very specific to each project. There are many variables that can affect the outcome, but there are also some universalities we should try to be aware of as we bring prototypes into our facilitation process.

We have already touched on Douglas’ point about the need for prototypes to start with a clear question – for example, “will productivity and revenue increase if we allow staff to work from home for one day a week?”, rather than “what would it be like if we had a work from home policy?” – so we will not spend too much longer on that.

Creating “high fidelity” prototypes reduces the risk of ambiguity, but Douglas stressed that we should avoid conflating high fidelity with “high resolution”.

Let’s dive into this a little further with examples from the world of software. After all, that is where prototyping is ‘typically’ found:

As long as a prototype is high fidelity, the user understands its purpose, regardless of its resolution.

A low resolution prototype is faster to create and can be adapted at a much quicker pace, though.

What does this mean through the lens of facilitation?

Being clear about the change we want to test is more important than testing the perfect example of it.

If we use the ‘working from home’ example from earlier, this would mean setting up clear controls and measurements for the test and getting started, rather than ensuring everybody is using the same laptops, running the same operating systems, and tracking their time to the minute.

How to perfect your prototypes and make the results stick

The hardest part of prototyping in workshops is not the process itself, but making the results stick after the workshop has finished.

Douglas pointed out some key considerations for facilitators and teams trying to integrate prototyping into their workshops:

On that last point, Douglas noted that there is “a real need for facilitated leadership and an understanding on how you can adopt the mindset and cultivate the culture around this way of working… and there’s no great recipe for that”.

So, how do we set a prototyping workshop up for success?

That last point is perhaps the most important.

“As facilitators, we need to make sure that we help teams understand any of the alignment we create. They need to know the language and the direction of the outcomes we created.”

“If we don’t rehearse that”, stressed Douglas, “if we don’t identify it and make it very specific, when someone gets stopped in the hallway they will go to an emotional space.”

Douglas underlined this point with an excellent summation:

“If we were all in the same meeting – it should sound like it.”

I am sure you are itching to hear more about Douglas’ fascinating interpretation of prototypes and how it can apply to workshops.

Well don’t wait around – you can listen to the show on your favourite podcast player, searching for “Workshops Work” or stream the episodes on www.workshops.work!

If you enjoyed reading my article, please share it with your network and sign up for my newsletter.