What Happens When You Get 11 Facilitators into an Organised but Unstructured Group Conversation? 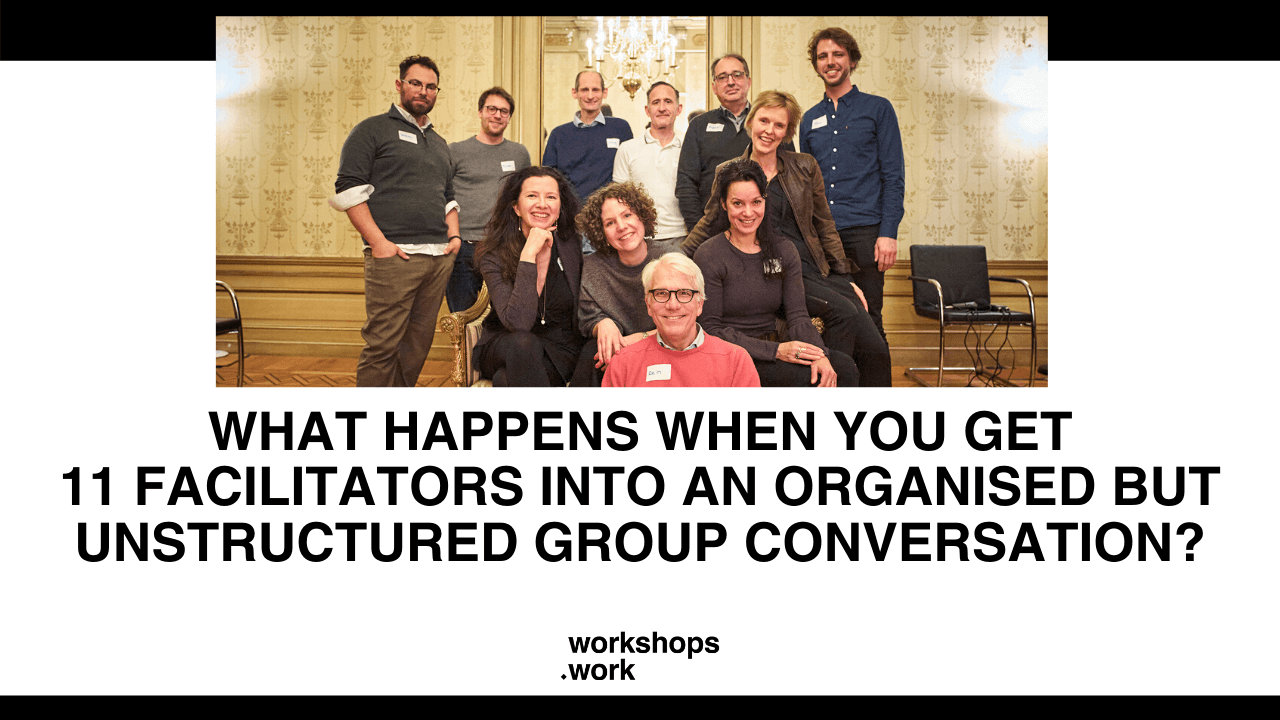 To celebrate the 50th episode of the Workshops Work podcast, Myriam Hadnes invited 10 of her podcast and mastermind guests for a fishbowl discussion of some of the biggest questions in the facilitation profession.

What followed was a fantastically fascinating, unstructured deconstruction of complex and contentious questions, conducted with great respect and plenty of cheer.

The discussion bounced around the room, from speaker to speaker and topic to topic, but some important threads ran through much of the discussion.

This blog post offers a summary of some of those threads but, if you would like to enjoy the full tapestry of this conversation, you will no doubt enjoy listening to the full episode.

Preparing participants for a workshop

Mireille Beumer starts a workshop with a powerful pair of questions:

“What do you really need and what do you want to get out of this session?”

She is steadfast in this practice because, as the room agreed, a client’s briefing and perceived purpose of a workshop is only one perspective on a complex issue. “Most of the times, in my experience, there is something different going on.”

For Shayne Smart, preparation means “you start with the end in mind but end with the start in mind”. The group debated what, or where, “the end” truly lies. Is it the end of the workshop? Is it in the evaluation? Is it when you’ve left the room? How about weeks or months later?

The group also discussed the need for flexibility and welcoming change midway through a session for, as well as one can prepare a group and oneself for a workshop, the topics and ideas that emerge cannot be predicted. A facilitator has to “play jazz”, as Shayne so aptly put it, “because you have to freestyle and improvise!”

For some facilitators, preparation is a luxury they often aren’t afforded. Jeremy Akers is often brought into meetings at the last minute, and so has a set of questions he knows he can ask every room:

“Who are you? What do you want to accomplish? Why is that important to you?”

Should every participant have a role?

“I don’t have to make sure everybody has a role”, believes Rein Sevenstern, “because just by being there they have a role, even if they don’t take a role.”

After this, a brilliant discussion emerged. Should we encourage, discourage, or remain neutral in the presence of non-active participants?

Myriam challenged Rein’s position. “As soon as someone doesn’t have a role, they invent a role for themselves and then they might hijack the meeting” as Myriam believes they want to “prove to themselves that they have a right to be there.”

The room couldn’t quite decide what felt right or wrong in this situation and the discussion morphed into if and when we should, as facilitators, hold ourselves back from facilitating.

Nadja Petranovskaja “wants the group to be responsible” for the changes and progress that are made. “It is their baby, and they love it because they did it.”

Max Brouwer agreed that “most of the time when you leave it to the group”, they will work through small misunderstandings or confusion. “But if you start explaining again, you fall into the trap of overexplanation – which isn’t good for the process.” This resonated with Mireille, who added “as a facilitator, sometimes you have assumptions.”

But, this was not a universal agreement. Marjolijn de Graff doesn’t “believe in neutrality.” “I think I am the most valuable for the group if I can oversize what’s going on” in different conversations. “I’m not being neutral”, but rather stressing what is happening.

“Being the neutral person is an idea… but I think it’s something that’s not really real because you always have an opinion.” Boas Loeb believes “you always make a judgement”.

If you aren’t neutral, are you involved in conflict?

Marjolijn likes to “find the sweet spot of conflict and trying to really zoom into that.” She finds that “if you enlarge the conflict, then you actually enlarge the social awareness of the group… People tend to get into this ‘we’ mode when you stress out the differences.”

“Conflict is something inevitable”, believes Boas, “but it’s really a part of it and you should welcome it.” Frans went on to raise a hugely important point:

“As a facilitator, you come in, you see certain conflicts, you make observations, you see difficult people, but then you also leave again. The teams, the people, are left with those dynamics.”

Frans Scheepens believes it is his “role as a facilitator… to get those people to realise where the conflict is coming from.

For Jeremy, the question isn’t about whether or not to allow conflict into the space. “I want to make space for both sides of the argument.”

If people are uncomfortable or unhappy, Mireille believes that “the golden rule is giving all people attention. Everybody wants to be heard – even if you’ve had a bad day or you don’t agree with the content or you don’t want to be there.”

Discomfort in the room

Zooming out from the discussions around the practice of facilitation itself and looking more presently at the room, there were some interesting moments that arose.

“There is a wealth of experience, expertise, and wisdom in this room”, said Rein. “I felt I was falling short of keeping track of what was being discussed.”

“I need time to make up my own mind”, agreed Mireille, “it’s difficult to really have my own opinion directly when I hear all the different opinions of other participants.”

Rein wanted to raise his feeling of discomfort because “I felt that we’re talking about things, rather than looking at what we’re currently experiencing.”

Marjolijn was “feeling the same discomfort.”

What was most remarkable, however, was that, upon being asked to “tap into that discomfort some more” by Marjolijn, Rein said “to be honest, I feel much less discomfort now.”

This moment of honest and openness gave new life to a comment that had been made earlier in the discussion, that simply pointing out discomfort or conflict in a session can go a long way to diffusing it.

One hour of expert insight and discussion

There is so much more that could be shared in this blog post, but the full experience of the show is far, far more impactful than reading words on a page.

Towards the end of the session, Myriam commented:

“I just want to use one second to reflect on what’s happening here because I think it’s beautiful.”

Please take a second (and then several more!) to enjoy the episode. It is also well worth downloading Myriam’s one-page summary of the episode, as it features key quotes from the participants that will hopefully spark moments of inspiration and reflection in you long after the episode has finished.

You can listen to the show on your favourite podcast player, searching for “Workshops Work” or stream the episodes on www.workshops.work.

If you enjoyed reading my article, please share it with your network and sign up for my newsletter.