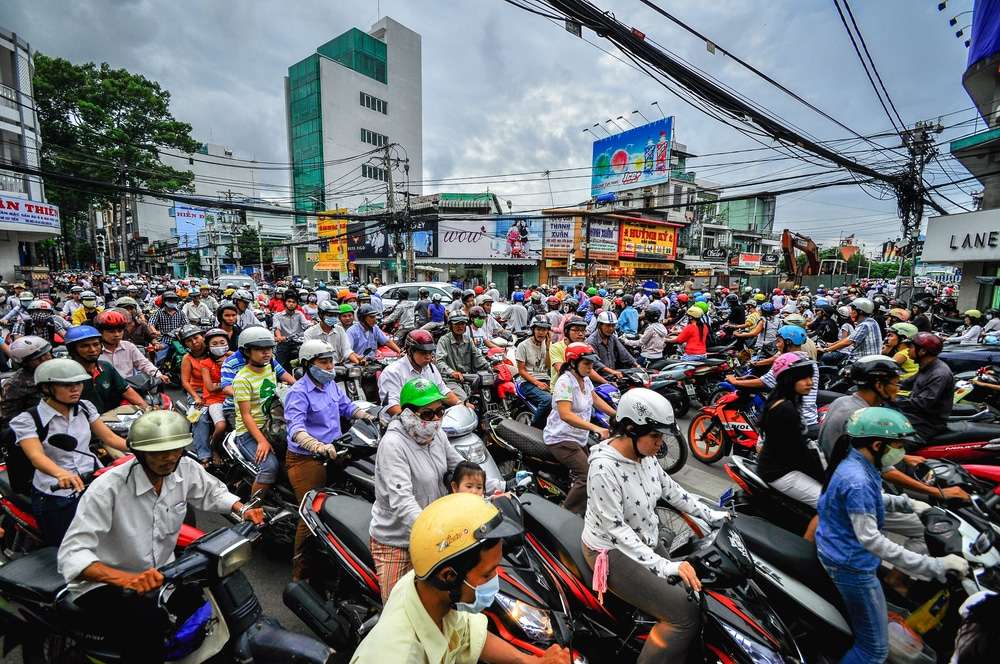 When my friend asked me what I missed from my life in Vietnam, I thought of my motorcycle. We started a conversation about our learnings from driving in Ho Chi Minh City (formerly Saigon) – a city that hosts 8.3 million people and 7.4 million motorbikes. [1] The conversation with my friend revealed that we both saw the analogy between driving in Saigon and navigating through life in general.

Except for mandatory helmet use, the omnipresent traffic police enforces only a few of the many laws on Saigon’s roads.[2] Hence, traffic becomes unpredictable in a way that pavements turn into additional lanes during rush hour; scooters drive down the wrong side of the street at all times and drivers usually type text messages and smoke while transporting other passengers, bulky objects or animals. So, immersing in Saigon’s traffic did not come naturally to me. It was terrifying. [3]

“One of the tourist attractions in Saigon is the traffic. It’s amazing to watch, but it is not that fun when you need to cross a street as a pedestrian.” Vietvisit

From the time I bought my white Yamaha Mio Classico to the moment I left Vietnam, it served me for over 20,000 km without an accident. In this article, I share my top three business lessons: (1) Slow down to speed up, (2) join forces to move forward, and (3) look ahead (not around).

Slow down to speed up

One reason why traffic in Saigon remains efficient despite the lack of regulation is its flow. Regardless of the chaos, the traffic moves at slow but constant speed without sudden accelerations or breaks. Expert drivers understand that it is the continuous motion instead of the speed that will get them faster to their goal.

Similar observations come from the business world. Studies show that successful organisations slow down to speed up. They focus on setting priorities and direct their energy wisely.

“[…] we find that if these top teams slow down, they eventually go deeper and faster into achieving their objectives. They deal more effectively with increased complexity and challenges – and they use less energy.”  (Chang and Groeneveld, McKinsey)

In Vietnam’s traffic, it seems to be the constant pace combined with the drivers’ decisiveness that avoids major accidents. Predictable driving helps others to anticipate and adjust their behaviour accordingly. As an inexperienced driver, I had to prepare my first rides by planning extra travel time to get lost without compromising punctuality and by drawing cheat sheets before each drive in which I broke down the way into sections and highlighted landmarks for orientation.

Translated to complex organisations, leaders can reduce uncertainty and thereby organisational risk through consistency and planning. Instead of rushing to a decision that might be adjusted shortly after, a well-planned and laid-out roadmap helps staff members anticipate decisions by understanding priorities. And, planning must not imply a lack of agility.

For teams to remain agile to pro-actively perform, organisations must embrace agile planning as much as Vietnamese drivers must take quick decisions without losing sight of their final destination.

A major highlight of Saigon’s traffic are its self-regulating roundabouts. During rush hour, the density of vehicles and absence of traffic lights often breaks the flow and forces drivers to halt. To navigate through without risking their lives, drivers join forces. [4] As soon as a critical mass of motorcycles built up, one courageous driver starts the process by moving forward. The bulk follows and forces larger vehicles inside the roundabout to stop and wait until the number of intruders fades so that they can move again.

“To be sure, a single person can make a difference at times, but even such heroic CEOs as General Electric’s Jack Welch emphasize the power of team leadership in action.” Herb, Leslie, and Price, 2001

Today’s economy is as complex as Saigon’s roundabouts. On first sight, the largest vehicles seem to dominate the flow and decide on priorities. The closer look reveals a winning strategy used by the smaller road users who can succeed by joining forces. After all, it takes more than one lone genius. Complex organisations need such courageous drivers. They need leaders who understand opportunities, have the charisma to assemble followers and the courage to start the movement by paving the way. And, they need agile teams to follow effectively.

Look ahead (not around)

A moving bulk of scooters without external coordination seems almost magical, especially when you notice the systematic absence of back-mirrors. Because drivers cannot capture everything happening in the unregulated chaos of Saigon’s roads, they simply don’t try to. Instead, they acknowledge that the only thing they control is their own driving. Hence, they focus on what is ahead of them instead of looking back and around. When we start driving, we often adjust when someone around us is about to take a move. This causes confusion because we try to interpret others’ actions instead of following our own path.

Just like the experienced driver cannot control traffic, the best manager cannot control what happens in a complex organisation. But, if the goal is clear as much as everyone’s role and responsibilities, each stakeholder understands the direction and owns their part of the process. Staff members remain responsible for their actions and may even surprise with novel ideas.

“If I really want to improve my situation, I can work on the one thing over which I have control – myself.” Stephen Covey

Nevertheless, attention remains vital on the road as much as in the office. Despite the drivers’ focus on their actions only, they must be aware of clues signalling unexpected changes. For instance, it is usually the driver’s quick look back instead of a turn signal that will indicate a change of lanes. If you overlook that subtlety, you may crash. Managers must equally pay attention to subtle signs that indicate an unexpected shift in direction so that they can initiate adjustments and prevent further damage.

The nutshell to take home

There are many things we can learn from daily experiences. Driving a motorcycle in Saigon taught me three lessons that equally apply to agile teams in complex organisations: First, they can speed up by slowing down. Instead of rushing through meetings or projects, it pays off to take an extra moment for defining goals, identifying potential obstacles and aligning all stakeholders. Second, we cannot count one a lone genius to drive a successful organisation. Effective teams help organisations to remain agile and leverage their full potential. Third, for agile teams to thrive, we must avoid micromanagement. If everyone is well informed about goals, roles and responsibilities, stakeholders can look ahead instead of around and operate in a pro-active way that will drive innovation.

[2] Check this beautiful blog post by Matthew Pike about the many laws on Vietnam’s roads.

[3] Out of precaution, I decided to learn from experts before investing in my own scooter. I spent the first two months travelling on the back of motorcycle taxis (or: xe ôm). The literal meaning of xe ôm is “hug the driver”, and once you sit on the back-seat, you understand from where the term originates!

If the content of the article resonates with you and you enjoyed reading it, please support me by liking, sharing, or discussing it! If you want more, check out my other blog posts and sign-up for my newsletter.